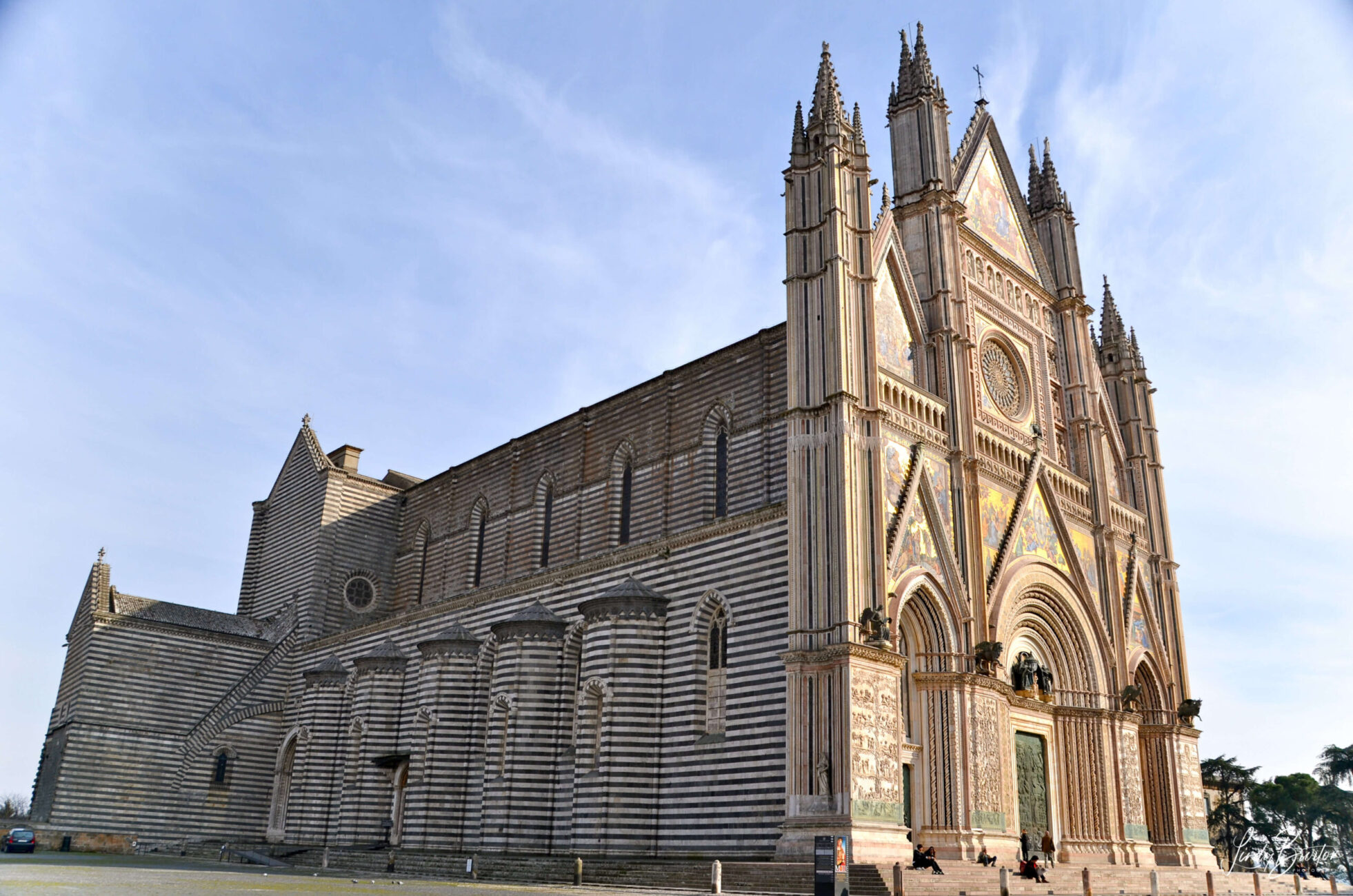 Well, I’m definitely not in Kansas anymore Toto!!  It’s like stepping back into the middle ages.

Caught the train from Rome to Orvieto in Umbria.  There are two sections to the town, the new town at the bottom of the hill, which nobody goes to and the old section at the top of the hill, which is the tourist part.  And the beautiful part.  The old town is then divided into the old part and the medieval part….so it’s old and older!

To get to the old town requires going up in a funicular (I know what a funicular is now), it’s a carriage on a kind of pulley system that goes up the hill.  Found my accommodation which was just lovely and worked out that I wasn’t going to be able to do some of the side trips I had hoped.  I had already resigned myself to not getting to Assisi but was hoping to visit Civitia di Bagnoregio, not far from Orvieto.  To see all the sights only takes about 1.5 hours at a crawl and the bus schedule would end up leaving me there for 4.5 hours and the buses didn’t run on Sunday so I gave it a miss.  Which left me an entire day and a half to wander Orvieto.  It was really nice to be able to just meander without having to see a list of sights.

It’s the first place in Italy I’ve been to that does the siesta thing.  Most of the tourist attractions and a lot of the shops close for a couple of hours at lunch time and reopen around 2 – 2.30.  I found the cathedral, it was hard to miss, the front is all spires and the sides is zebra stripes.  Checked it out, very interesting and saw a few small museums as well.  I went to the end of town (the medieval part) to check out the final museum and went down a street/alley to check out the view and when I turned around I was in front of a very old church which was closed.  An old guy told me that it was closed for renovations and he started chatting about the church and that he was born in the area and became my unofficial guide and historian for about 20 mins.  Luciano asked where I was from and then proceeded to tell me that his father had been a POW in Tasman Land.  No matter how many times I told him it was Tasmania, he still didn’t get it.  But he took me down the street to see the view of the Etruscan Tombs and then back to the main street and pointed out some of the old buildings.  He was such a sweetheart especially when he asked me if I was on my gap year before starting uni….I damn near kissed him for that.

It’s hard to tell who is a local and who isn’t but given that it was only 9am on Sunday morning, I was taking the majority to be locals and they were all out wandering the main street probably on their way to one of the many churches in the town.  I stuck my head in the door of one of them and was quite surprised to see the gas heaters (like they have outside at restaurants) down the aisle of the church. But then again, these churches are so damn big they need to keep the congregation from freezing to death….then again, 2 birds with one stone….a sermon and a funeral all in one.

I went up the clock tower, the lift only goes to the second floor and then it’s 200 stairs to the top but the view was worth it.  I timed it quite well that I missed being up there when the bells chimed.  Then I decided to walk ‘le rupe’ which is the path that goes all the way around the bottom of the town.  I’d been told it was mostly flat and an easy 2 mile walk.  Mostly flat with bits of steepness but it was a nice walk and then I decided to participate in the time honoured tradition of siesta and retired to my room…..to catch up on my blogging and photos.

Hey I’ve been there in 2008! Fantastic little town, love the quirky cafe there. The church was just going into renovations. Wondering if you stayed at the same place I did (name is slipping me) but the cable car and train station were awesome!

I’m guessing you are talking about Orvieto. The place I stayed in has only been operating as a B&B for 2 years, B&B San Angelo 42. But great place.