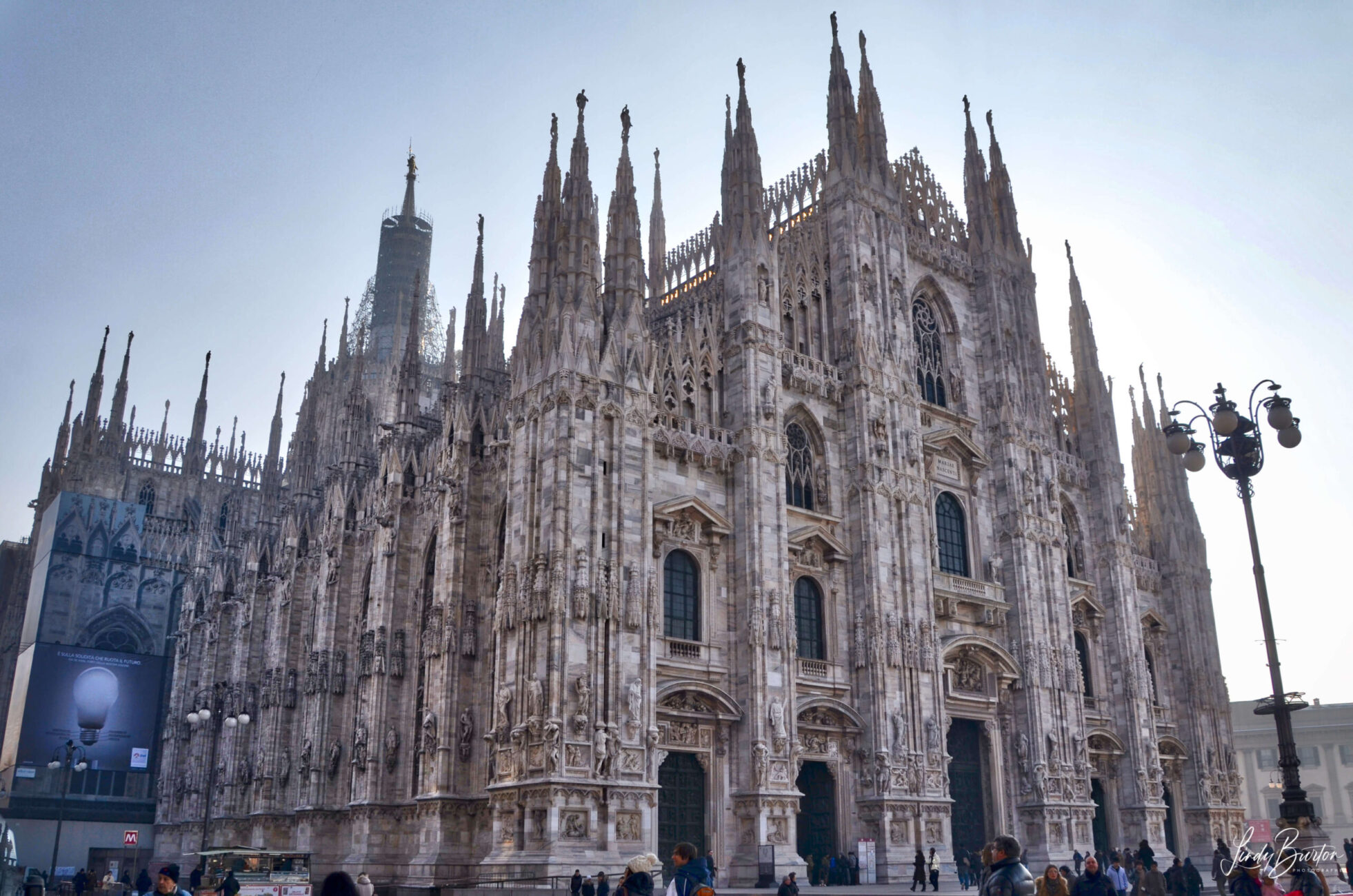 Of all the places I’ve stayed on this trip, I picked the crappiest one for the final city, Milan.  It’s very much a backpacker place but not in a good way.  I’ve paid extra for a private room and the room is huge but the bathroom is pretty awful and there’s a lot of noise not just from the street but also from everyone walking up and down the hall and even talking in the next room.  Every place I’ve stayed in has had a hairdryer, not always very effective hair dryers but hairdryers nonetheless and they’ve all had heat towel rails (not that that was priority) but they’ve also included breakfast and this one doesn’t have any of the above. Given that it’s the same price as some of the other places I’ve stayed, it’s also the first time I’ve given bed bugs a thought and that I wished I’d bought thongs to wear in the shower.  So I stayed there the first night and couldn’t bring myself to use the shower, a good wash has to do the trick and found somewhere much nicer that afternoon.  My last night in Milan cost a fortune because I’d paid for the crappy place in advance and then had to fork out for the other hotel…..ah well you get that.

But what about Milan, I hear you asking….or am I hearing things.  To see Leo’s painting of ‘The Last Supper’ you have to be in a group or hope like hell you can wing it (which is apparently very rare) so before I left I booked myself on a 3.5 hour Milan Tour, yes I was one of those people hooked up with a radio and following a person with a flag (the people I love to hate).  Don’t get me started on the American’s in the group.  We started off at the La Scale Theatre – the home of opera – unfortunately the house lights weren’t on but we were able to stand in one of the boxes and even in the dark it was beautiful.  The we walked through the Vittorio Emmanuel Galleria which is a host of beautiful old buildings (with very expensive shops) covered by a fabulous glass(?) ceiling.  It’s very impressive. This takes you through to the Duomo square and the Duomo is amazing.  It’s white, pink and grey marble with spires and figures and it’s huge (surprise surprise).  It’s in the top 5 of the world’s biggest churches and is very gothic, which makes a change from everything else that I’ve seen this trip and as usual it was amazing.  It’s also full of incredible stained glass windows.

From there we caught the bus and went for a drive around Milan and we stopped at the Sforza Castle and had a look around the courtyards.  There are a couple of museums there also but we didn’t go into them, thank God.  Then back in the bus and off to the former monastery of Santa Maria delle Grazi where ‘The Last Supper’ is.

Now, like it or not, you are going to get a bit a history lesson.

While The Last Supper is actually classed as mural because it painted on a dry wall, so it’s not a true fresco as they are painted on wet plaster.  Because a fresco can’t be modified as the artist works, Leonardo sealed the stone wall and then painted with egg tempera (fast drying medium consisting of coloured pigment mixed with a water soluble binder).  Because of the method used, the piece began to deteriorate a few years after Leo finished it.  The monastery got hit by a bomb (along with a lot of Milan during WWII) and the building on the other side of the painting was destroyed and somehow the wall with the painting remained in tact.  As the work deteriorated over the years, it has been restored by literally painting over the top of it.  From 1979 to 2000 they have restored it, taking off all the extra layers back to the original work. The original colours are quite bright and you can see shadows and highlights.  Where they have painted the restored colours, they have left it a more pastel shade and haven’t tried to reproduce Leo’s work by trying to do shadows etc. So you can definitely see what is the original and what is the restored work.  I’m hoping this makes sense.  But it’s huge, I was expecting something quite small and it’s beautiful.  Apparently, Leo took quite a bit of artistic licence – it’s recorded that the supper was held at night and it’s definitely daylight in the painting, they would have been sitting on the floor, not at a table and there wouldn’t have been a table cloth and the scene outside the window is Tuscany.  Oh and by the way Da Vinci wasn’t Leo’s surname – da means from and Vinci is the town he was from, so it Leonardo from Vinci.  It was amazing, the expressions on the faces are great, the detail is incredible.

Then the bus dropped us back where we started.  I walked back to Duomo along Via Dante window shopping, had a nice lunch and went back to the La Scala Theatre to see it with the house lights up.  It’s even more amazing with the lights on.  The opening night of Aida was that night and they were doing set rehearsals which was interesting to watch.  I found out about Aida from an American couple on the pub crawl in Venice and would have loved to have gone.  I tried to get tickets but they were sold out and besides, I couldn’t have gone to the opening night of the opera in Milan in the clothes I had.  Then I found a new hotel for the night and went and picked up my bags and settled in the new place.  I was on the 8th floor and had a view too.

My last day in Italy…sob sob.  There were only a couple of things on the list for the day.  I surprisingly wanted to see another church only because it was built in the 4th century and it turned out to be just down the road from the new hotel.
Then I went for a walk back through the Sforza Castle to Sempione Park to go up the Branca Tower.  When I first saw the tower, I thought I must have the wrong place because it was just a steel pipe tower and I couldn’t see a lift but then I noticed the cables in the middle.  It looked closed and I was thinking that was good thing, when the guy came out  and asked me if I wanted to go up.  What the heck, I probably won’t go to Milan again so we went up the glass lift 108.6 metres above Milan.  The view was spectacular and Milan is massive. I wanted to go up to the top of the Duomo as well but with the renovations to the spire, they have closed the roof off.  If the gold Madonna on the top spire doesn’t look very big, think again, it’s 4 metres tall.

When I walking to the park there were stacks of Brits heading towards the square, all dressed in red and white soccer jerseys.  Being Wednesday, it thought it was a bit early for them to be coming over for a weekend soccer game.  I asked the guy at the Branca Tower and there was a game that night – Milan vs Arsenal.  So missed both the opera and a huge soccer game.  To see a game in Italy would have been great.  By the time I got back to the Duomo square the Poms had taken over en masse and were pissed as farts and singing soccer songs that only they can understand.  I think they must have been playing drinking games because the ‘inner circle’ had beer everywhere, they were going through slabs of Heineken like it was going out of fashion and the beers cans were littering the place.   For someone who has never been to a game of soccer in Europe it was great to hear the singing but this was lunchtime in front of the cathedral, not at the game.  I’m sure half of them would have been comatose by the time the game started.  It’s no wonder the British soccer fans have such a bad reputation.

I got to the airport in plenty of time however the plane was running late getting in, which meant we were late taking off by about 30 minutes and with a lot of turbulence for the first 40 minutes, we were behind schedule and my 40 minute turn around time to catch my plane in Helsinki was vanishing….fast, and consequently my flight had left by the time we arrived.  So I had to spend another day in Helsinki courtesy of Finnair.  I can think of worse places to get stuck.

The big question was what to do!  The tourist info guy suggested museums and galleries, but that just wasn’t going to happen, so I went to the zoo.  But first I had to get the shuttle bus to the airport to pick up my case, shuttle bus back to the hotel to drop off the case, shuttle bus back to the airport to get the shuttle bus into the city.  And then catch the bus to the zoo.!!  The zoo is on an island currently surrounded my a massive frozen river.  There were groups of people out ice fishing.  It was weird seeing a lion lying down surrounded by icicles and snow.  Not a very lion like image.  The tiger and lynx were pacing their cages and a couple of snow leopards were asleep on a platform.  A snow leopard in a different cage decided to get up and started calling to his mates.  I wanted him to look around so had to imitate his call which is a fairly high elongated ‘ouch’, it got the desired result.  They have a really good Amazon and Africa/Asia exhibits too.  My only complaint about the zoo, is the cages….it ruins the photos.

So I eventually made is home a day later than planned and very sleep deprived.  Both flights were completely full and unfortunately the last involved a child that cried for nearly 8 hours.  There should be a cone of silence for children on planes.   I’m also really curious to know why people think that just because it’s morning and they’ve woken up on a plane that it’s okay to do smelly farts….I mean really people.

So now I just have to get over the incredible urge to constantly sleep and get over this cold I’ve brought back with me.