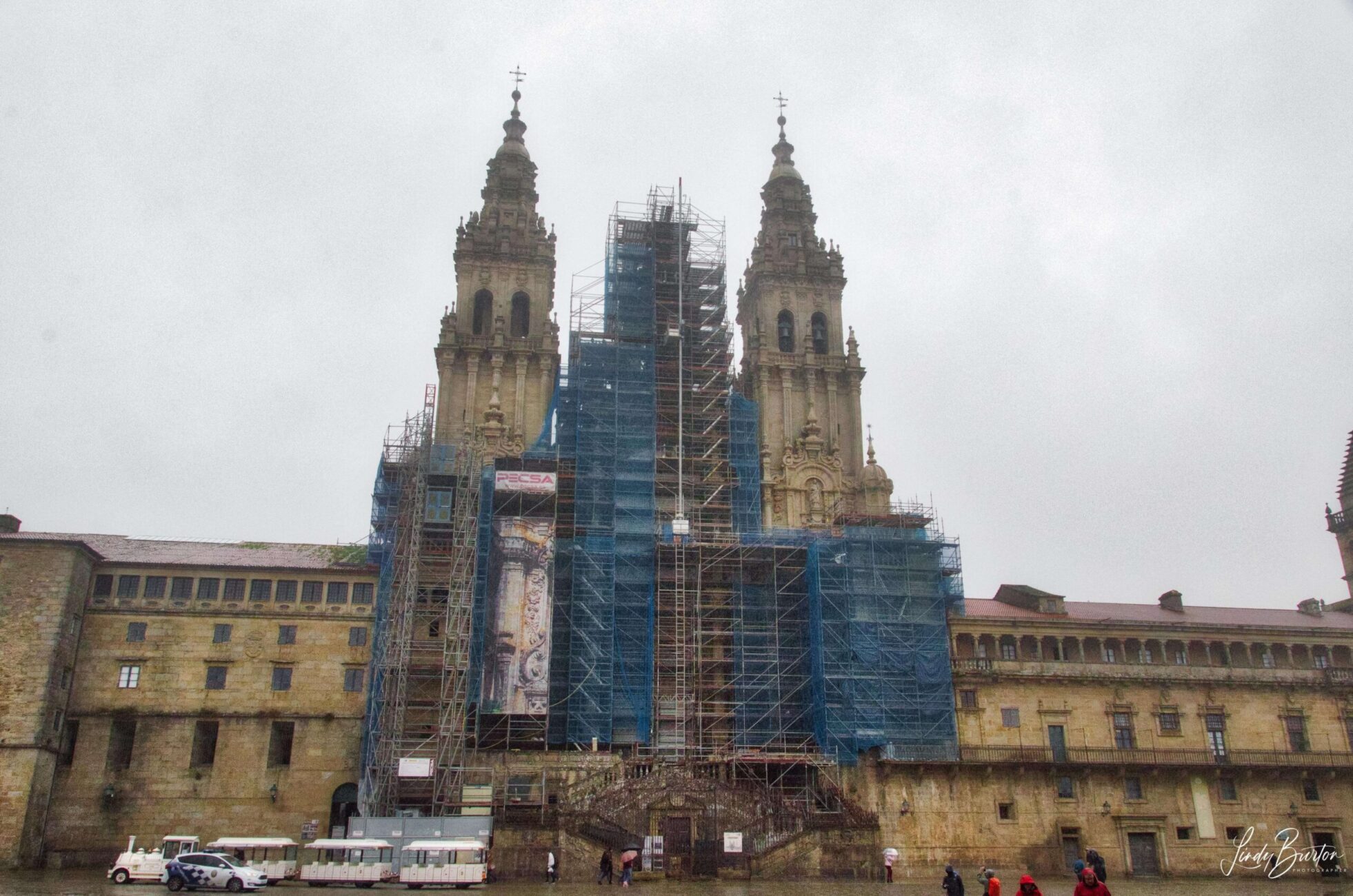 I realised this morning that I’m officially a tourist and no longer a pilgrim, which made me sad. There’s a certain feeling (don’t ask me to describe it) about being a pilgrim. Although after consideration, I have come the conclusion that I will always be a pilgrim, it’s just that I’m no longer on pilgrimage.

I moved hotels alas, I couldn’t afford more than one night at the 5 star Parador. The Hotel Compostela is still 4 star but the difference in the attitudes of the staff was mind boggling. At the Parador, they were not forthcoming with information and had the crappiest map whereas the guy at reception at the Compostela gave me maps and lists of restaurants and couldn’t have help more.

My ‘after Camino’ box of clothes and stuff has arrived and I now had to work out what to send home and how the hell I’m going to get everything into my pack. I also have to get the weight down because now the bloody thing has to go on my back for the first time. I’m looking forward to the cold so I can wear my down jacket and not have to shovel it in.

I decided to do the Rooftop Cathedral tour and was really pleased to run into the crazy Alaskans – Joanie and Amy. There are rooftop tours and then there are rooftop tours and this one falls into the latter. I’m expecting to be on a flat roof with great views and we are on a pitched roof with great views. Until you get the hang of walking on a large tiled sloped roof, it was pretty freaking unnerving. At first I was having trouble even turning around, I think I preferred walking around to standing in one spot. There is no way that would be allowed in Australia. We’d all have to be harnessed and be on walkways and oh so bubble wrapped. Went out for drinks and tapas with Amy, Joanie, Cite, Derek and Jodie (Aussie couple) and then out to dinner.

I feel somewhat guilty that I’m out enjoying myself a few days after Dad’s death but I realise that life does go on. I’ve also wondered if being away and not surrounded by sympathy is a faster way of getting over it. (Turns out that isn’t the case at all).

Kind of a fruitless morning, although I did get to the laundromat. The bookshop was closed (power failure), the camera shop was closed (siesta) and the markets were just about done (home time). I love the idea of siestas but it would be really nice is there was an across-the-board set time for it. For most, it seems to be close at 2pm and reopen at 4 or 4.30pm but for some it’s close at 1.30 or 2.30 and reopen anywhere between 4 and 5.30pm. And each shop keeps their own times….it’s so annoying. Some have signs of their doors, others don’t and it’s hard to know if they are on siesta, on holidays or closed for good.

Spent a couple of hours at the Cafe Casino (just a name, not an actual casino) in a very comfy lounge chair writing and reading. The clientele has changed from men red wine and reading the paper to tables of old ladies drinking tea/coffee/hot chocolate chatting. I feel quite young and under-dressed (as always) but the atmosphere is very comfortable.

Traffic cops here have a death wish. The streets aren’t the widest and with one lane going each way, it’s not wide enough for them to stand straight on, so they have stand side on while trucks and buses come with inches of them.

I had really wanted to get to Finnisterre (known as the End of the World) which is on the coast and I ended up doing a day trip. The first stop was at the Rio Tambre (River Tambre) at Pontemaceira, which was beautiful and very peaceful (even with a bus load of people). As it was still fairly early, there was still a bit of mist on the river, add a really old bridge and you have the makings for good photo ops. Next stop was for a cuppa which came with a slice of the lightest, fluffiest, yummiest cake I’ve had in ages, definitely the best in Spain. From there is was on to Cascada de Ezaro, the only waterfall in continental Europe that flows into the sea.

I was disappointed that we didn’t stop in the village of Finnisterre because I wanted to see it and was hoping to run into some friends, however we went straight to the Lighthouse. Walking up to the lighthouse, is the way-marker 0.00kms which meant a lot to me. I was surprised that I had to fight off everyone else on the bus to get a photo when the significance would be lost on them. I walked out past the lighthouse and sat on the rocks near the place where people do a ritual burning of an item of clothing. There were other pilgrims around me who had obviously walked from Santiago de Compostela to Finisterre and it was nice to sit in their company and feel the emotion of finally making it to the end of the world.

Again, we missed out on walking around the village of Muxia, going straight to the beach. Finally got to the restaurant for lunch at 2.30pm for a fairly decent lunch, having a good chat with Antonietta, an American lady, and then back to Santiago.

I needed to get myself fully packed and ready for the morning. Even though my flight was at 9.30am, I was skyping in to Dad’s funeral (afternoon in Adelaide, 1.30am in Spain). A very emotional night with only a few hours sleep before the flight to Barcelona.