From Thimpu to Trongsa to Bumthang and back again 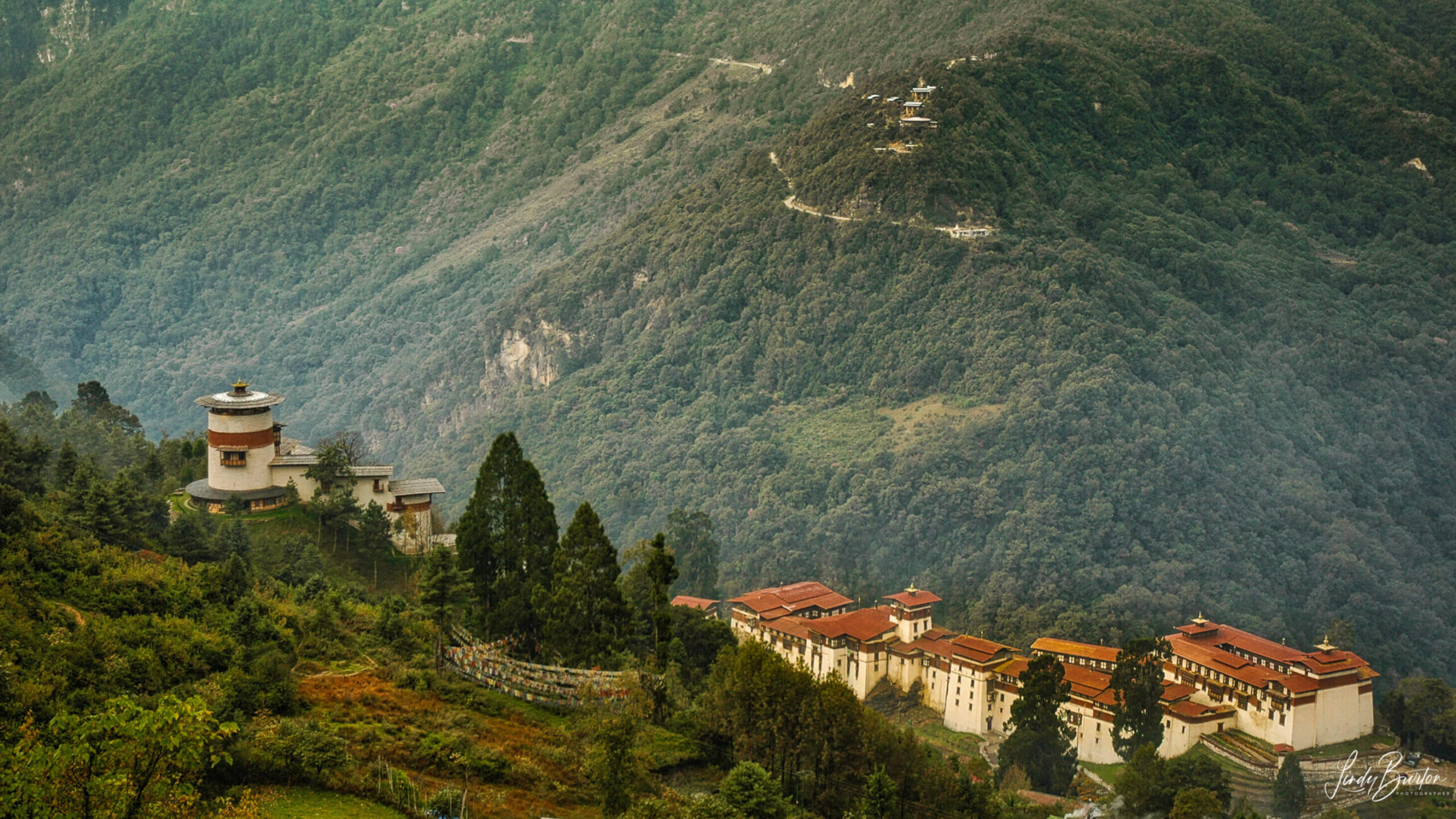 Wow, this could be mammoth, how much can I really be bothered typing. I’ll give it a shot and see how far I get.

This is God’s country……well Buddha’s really. It is jaw droppingly (if that wasn’t a word before it is now), gob smackingly beautiful.

Oh you want more, bugger….
Okay Thimpu, pronounced Timpoo. Started off at the National Memorial Chorten (in honour of one of the kings), went to the top of the hill for a view of the valley and walked back down the hill to the Takin Mini Zoo and then walked around the zoo. The Takin is a very weird looking animal native to Bhutan (apparently the ‘Divine Madman’ was having a bit of a laugh the day he designed the Takin – it’s has the body of a cow and the head of a goat (or so they say, can’t see it myself but it sure is weird). Visited a nunnery and then went to the Taschichhodzong which is massive and very impressive. The temple in the dzong is amazing. There isn’t an ounce of timber that isn’t decorated and while that sounds really gourdy, it’s incredibly done and just stunning. The giant buddha was gorgeous, much more striking that the images of a tubby happy chap we are used to seeing. And of course, there are no photos inside the temples and didn’t that just about kill me. Went to a folk heritage museum which seemed quite pathetic at first but got considerably interesting and then to local markets. Left my guide and driver behind and wandered the main streets and a few of the back streets as well and walked back to the hotel which was on the other side of the river. The Bhutanese all speak English….okay let me rephrase that, the educated Bhutanese all speak English. All the lessons at school are English except for Dzrongka which is their native language. So it’s really weird when little kids call out and have a chat in English…..just doesn’t seem right. Speaking of things not seeming right, nuns with ipods and monks with mobiles wearing North Face branded clothes is really hard to get used to.

I thought the bed in Kathmandu was hard, well it’s nothing on the beds in Bhutan, good grief they are rock solid. If you have a bad back, they’ll sort you out one way or the other. A lot of driving for the next few days. First stop was Dochu-la Pass with fabulous views of the Himalayas, would have been better with a few less clouds and a gorgeous temple. It’s a relatively new temple so the paintings were very modern which was really nice. I’m getting used to whipping the shoes on and off although taking my shoes off when there’s ice on the ground is a little harsh. The 108 chortens were pretty impressive too. Drove through to Punakha to the Punakha Dzong. Wow – breathtaking. It’s massive and sitting next to a turquoise coloured river (that looks really cold) and it’s just amazing inside. The most impressive temple in Bhutan and we happened to be there when the monks were moving the scriptures which only happens once or twice a year and we just happened to be there at the right time. The courtyard had been fairly empty until the monks came through and people came from everywhere to be blessed (the monks touch the scriptures to their forehead) so that was pretty cool (my guide was just about beside herself). Driving through to Trongsa we went through so many different types of forest, the landscape was continuously changing and each type of forest is equally beautiful as the one we had just passed through. There was even rainforest. Stopped to buy roasted sweetcorn (cooked straight on the coals, yep ash and all) from some woman on the side of the road.

But back to the drive, we were climbing and descending in and out of valleys and going through passes between 3000 and 3500 metres. I kept wanting to ask Tshering to stop so I could take photos but I knew they won’t do any justice to the scenery and we’d only get 2 feet before stopping again. It was 200kms (probably only 50 kms as the crow flies) to Trongsa but it took us about 6 1/2 hours. Bhutan is an incredible series of hills and to get anywhere you have to up, over and around the hills. The roads are really only a lane and a half but they are for two way traffic and while they are bituminised (mostly) they are pretty rough and bumpy. So the only way to drive is, of course in the middle of the road and given that it’s incredibly windy and there are constant blind corners the only way to alert the oncoming traffic is to toot and Tshering is a very enthusiastic tooter. But you aren’t just tooting for oncoming traffic, you have toot for people walking on the road, then there’s dogs, yaks (saw my first one), chickens and the odd cat. And you can’t just do a polite toot-toot, noooooo it’s gotta be a tooooooooot tooooooooot toooooooot and even a few more toooooooots if the feeling takes him. This is okay for short periods of time but when a journey of 200kms takes over 6 hours (doing about 40kms most of the time) it gets a tad aggravating. He’s just lucky he’s a buddhist. And speaking of chickens (mentioned several lines up), we nearly went through the windscreen for a damn chicken. Anyone else would have just hit the bloody thing but we are in Bhutan and these are Buddhists. Don’t bother coming to Bhutan if you get car sick or are a nervous passenger. The saving grace is that you are in a country of Buddhists who don’t want the karma associated with injuring, maiming, let alone killing anyone, so you just sit back and enjoy the scenery. The road from Thimpu (the capital) to Paro (where the airport is) is 2 laned and fully bituminsed but that just means they’ve got more road to use….woohoo

The guesthouse at Trongsa was quite nice although I’ve never slept in a bed so hard. The ground is softer than that bed. There were plenty of blankets and once I got the oil heater cranked up and humming along nicely, warmth wasn’t an issue (because trust me it’s bloody cold). The mattress was about 2 inches thick but it’s on slabs of timber. Not slats that have a little give, these were full on industrial strength timber slabs. Then I had to tackle the shower. Huge shower head but only a quarter of the nozzles worked and it was constant fight with the holt and cold water. It was such a task to get the shampoo off my hair with so little water that I was buggered if I could be bothered with conditioner when I still had to wash myself. Honestly if it hadn’t been for the most spectacular view I probably would have done absolutely nothing and simply said ‘malesh’ and just complained in my blog.

Went to the Trongsa Dzong and then walked up the 400 steps to the Watch Tower Museum. Really interesting with some of the stuff being over 500 years old. Then a 2 hour drive to Bumthang (there is no English equivalent to pronouncing Bumthang – the u in bum is more like an oo but clipped, so it’s more like boom-tang but not). Again more stunning scenery. Bumthang is very significant for Buddhists but it’s a very shanty style town, much different to what I was expecting. Went to the Dzong where the monks were doing/having/performing (not sure of correct terminology here) a ceremony, then went on a temple odyssey. The first one was built in 659AD (kinda looked like it but still pretty awesome), then to a place that has 3 temples – the oldest built in the 17th century has the cave with the footprint of Guru Rinpoche and yes I saw it, the other 2 temples were built in 1900 and 1990 and finally to temple built in the 15th century with original wall paintings that haven’t been retouched. Some of them were looking a little worse for wear because they are exposed to the light but there were some that are still very much holding up well. And the bed situation at Bumthang didn’t get any better, it somehow almost made the timber plank look soft.

Another long day on the road, heading back to Punakha. Drove through to the Phobjika Valley where the Black Necked Cranes come on their migration and you guessed it, it’s migration time. Got to check out the cranes from the observation centres high powered bino’s. These are big birds standing 1.5m. The town of Phobjika doesn’t have electricity yet because they are concerned about the birds getting caught in the powerlines so by next year they will have completed the underground cabling for electricity. An entire section of the valley is reserved for the cranes and even the king got refused a permit to build a hotel on it, so they are very serious about protecting the cranes. Then it was the continuation of the long drive. We left at 8am, got in 5pm and only had a max of 2 hours out of the car. But stayed at a relatively new hotel that was very plush in comparison to some of the others. I actually started this last night but because it’s such a massive undertaking I had to have a rest and it was costing a fortune….well probably on a few dollars when I stop to work it out….damn I’m becoming a scummy backpacker.

Okay that takes us up to last night. If I had the vaguest idea of the date or what day of the week it is, I’d fill you in but I don’t, so deal with it. Anyway, I need to get to dinner and tomorrow is a big day, my last day in Bhutan 🙁 very sad about that and I’m doing the hike up to the Tiger’s Nest, it’s going to be a bit of training for Nepal. So gotta go and will try and finish this off tomorrow night – but don’t put money on it.

PS feel free to email me, it’s a bit boring when I open my emails and it’s all junk.