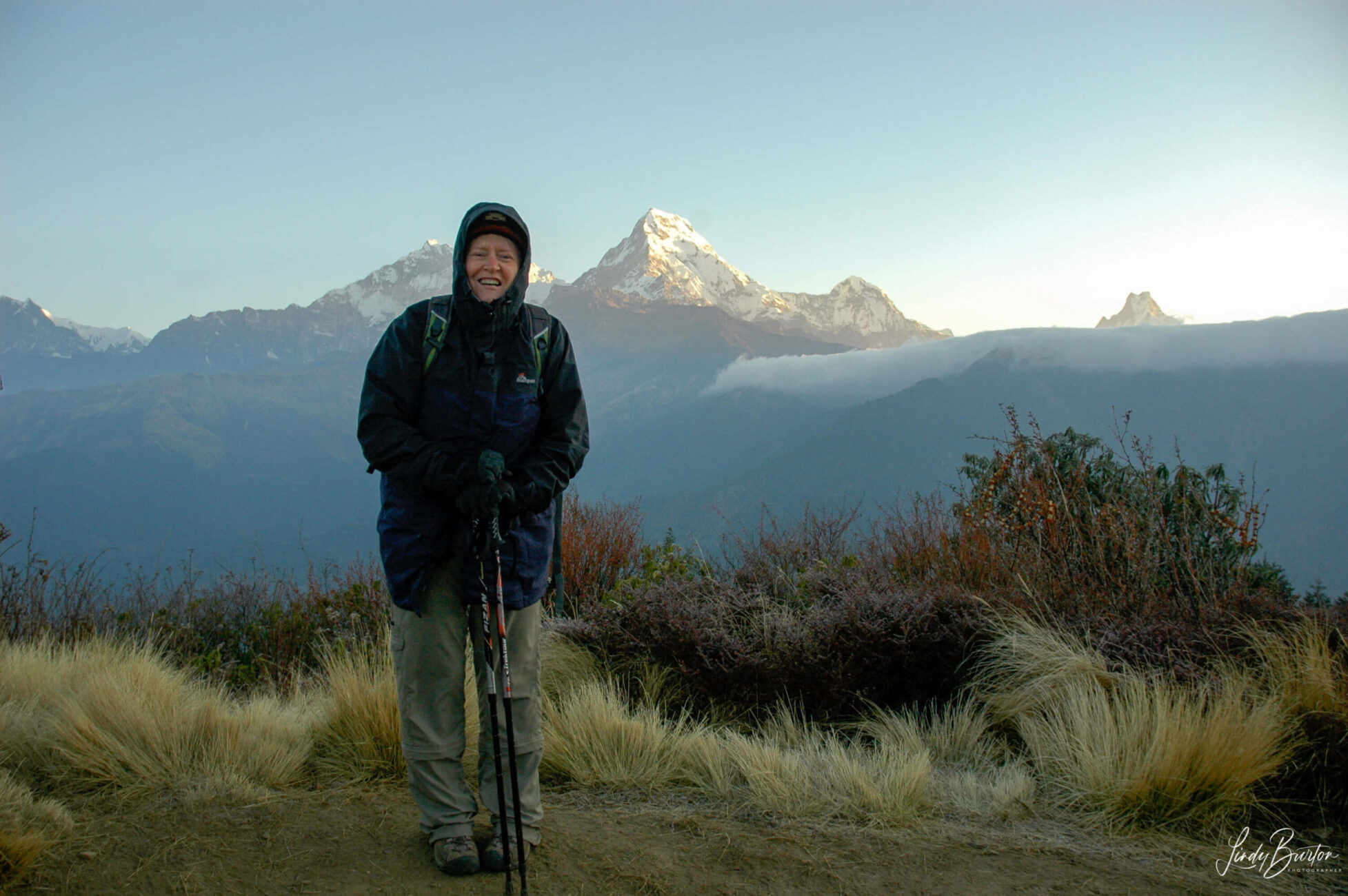 I was also thinking of titling this:
Lindy’s Everest or Easy to moderate trek – my arse

Well I’m back in civilisation which is a bit of a disappointment after the pristine environment of the Himalayas. To tell the story I’d better start at the beginning although I will have to keep this relatively short because I will be able to rabbit on regardless for days about the the past 6 days.

Day 1 – Fly from Kathmandu to Pokhara. The 9am flight left at 12pm due to Pokhara airport being closed because of fog which is very unuusal for this time of year but not unusual for a Nepalese flight to run late. So we were obviously 3 hours late to start with and then had a 2 hours drive to our drop off point and a 40 minute walk to the village of Birethanti for lunch at about 3pm. Our guide (Prabin) decided we would stay there for the night as Syauli Bajar (the place we were supposed to stay) was another 2 1/2 to 3 hours away and we’d be getting in in the dark so we trusted his judgement it just meant a much longer walk the next day. We woke to beautiful views of Mt Macchapucchre 9from here on in I’ll refer to it as the Fish Tail because Macchapucchre iis to hard to spell).

Day 2 – What should only have been a 2 1/2 to 3 hours walk was now a 5 to 6 hour walk and the first half of it was great and really enjoyable until we the stairs. Hundreds of them and they just kept on coming and I don’t mean regular stairs these are uneven stone stairs. so I just went slowly slowly with Prabin walking behind me and I eventually made it to Ghandruk, where I walked in to our lodge, laid on a bench and vowed and declared I was going no further ( I was 1/2 hour behind the others).

Day 3 – We just kept going up. Most days are about 5 hours walking and we start at 7.30am and have lunch we when reach the lodge. We were walking along side the Moda Kholi (river) and though beautiful rhododendron  forests. Spotted a few monkeys in the trees but they were in the distance even though Prabin and Kamal (our Sherpa) went bush trying to get them closer). The scenery was amazing but it was still steps, if they weren’t stone they were logs and tree roots. I was seriously doubting my ability to do this but Prabin kept saying slowly slowly and that he’d had people do it slower than me. Although I think he’s just being kind. Our lodge was in Tadopani and we had awesome views of Macchapucchre (copy and paste works a treat) and Annapurna South. It was freezing cold and that was the first night we really stared layering up. Spent the afternoon and evening playing cards with some of the other guests and our porters. I taught them how to play ‘Speed’ and we ended up with just Amy, Chris and myself playing and about 9 Nepalese in hysterics watching us. A really good night.

Day 4 – the day from hell. We climbed out of Tadopani and then had a steep descent which of course means a very steep ascent. And again it is stepping up some form of step/stair the entire way. We were rising about 500m but to an elevation of 3100m so it was pretty tough going and at the rest stop at Deurali I was an hour behind the others and it was freezing cold. Leaving Deurali in the clouds, we headed to Ghorepani about 2 hours away. Most of this was flatish with small uphill sections and it was quite eerie going through forest surrounded by cloud. I knew we were walking along a ridge and we would have had spectacular views had we been able to seen absolutely anything. I was so relieved to get to Ghorepani and when I walked into the lodge about 40 mins behind the others to a toasty fire, I was nearly in heaven except I knew I had the walk to Poon Hill to do. And I was seriously doubting my ability to do it.

Day 5 – Up at 4.30am to start walking at 5am to watch the sunrise. Head torch on and armed with as much clothing as possible we headed into the night. Prabin allowed an hours and a half for the 5km 400m ascent which I managed to do in about 1 hour 5mins only because I knew I had a deadline. Once we got out of the tree line though the wind whistled straight through me. I must admit to do a woohoo when I made it although to the200- 250 other people up there it was a walk in the park. But it was bloody freezing, I have never ever ever been so cold in all my life and I never ever ever ever ever want to be that cold again. But the views were amazing particularly Annapurna South, it was spectacular. We were having serious concerns about when frostbite sets in and wondered if the bloody sun was ever going to come up. Ah but when it did it was a blood red sun that came up over the hill – the colour I have only ever seen a sun set and the entire crowd cheered. That moment for me was so emotional (I get teary every time I think about it) and it was then that I realised that I’d climbed my Everest and I was really proud of myself for what I’d done because damn it was frigging hard. After spending about 15-20 mins up there taking a gazillion photos we were really keen to get some blood circulating so headed down to the lodge for breakfast and then the 5 hours of downhill….woohoo. We had out last view of both Macchapucchre and Annapurna South just before Ulleri and then started down the steps….all 3288 of them. Stone steps unfortunately not even steps. When there was a dozen or so that was even it was great to get a rhythm going but a lot of the time it was a case of literally picking our way down often sideways to get a good footing but incredibly steep and the jelly legs was really hard.

Day 6- 3 1/2 hours today, still downhill although we are all suffering from very sore calf muscles and walk like ducks after we’ve been sitting down for a while. Saying good bye to the boys was hard, they’ve been our little family for the past 6 days. Back in Pokhara we went for a walk along the lake and wandered the main street and went out for dinner. We have an early call in the morning as we catch the 7am bus to Chitwan National Park which will take about 6hours but this is Nepal so probably longer. 2 nights in Chitwan and then the bus back to Kathmandu so probably won’t be in touch till then. And then it’s only a couple of days 🙁 . I have lost all track of time, I couldn’t tell you the day or the date (I have to keep asking the others) I only know where I am up to on my itinerary.