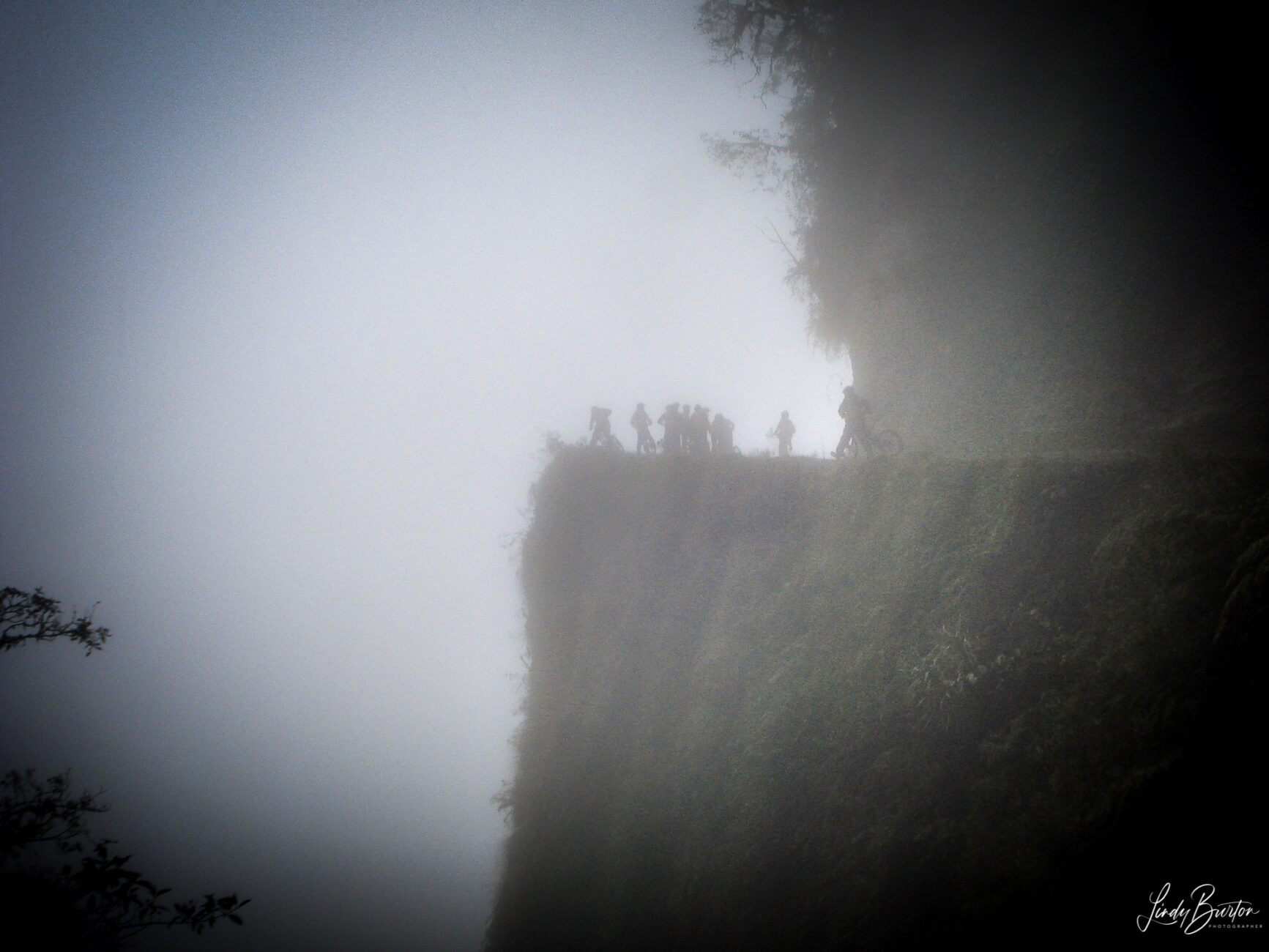 Before I left I said there was one thing that there was not a hope in hell that I would do….zip, zilch, zero % chance of me doing…..and that was the Downhill Mountain Bikeride on the ‘Death Road’…….well, I did it, in cloud, fog and rain.

Our tour leader managed to make it sound a bit less scary and I decided that if I hated it that much I could always put my bike on one of the support cars and drive down but it was worth a shot. Once we got into the mountains we were clouded in, which was kind of a good thing because I couldn’t see how far down it was, basically I couldn’t see anything. Then it started raining and my fingers were so cold I was wondering if frostbite was a possibility (even though I had gloves on) and I was moaning every few feet because I was so cold. The first 30kms are on bitumen on the highway and then we go off road for 34kms. I got to the tunnel and the guys stopped me and I was getting concerned about how cold my fingers were and they said it was a couple of kms of up hill riding and I decided to get in the support car. Matt was already in there and we were the tailenders and about 1/2 an hour behind the others. We caught up with the others at the morning tea rest area and I felt better when I found out that one of the other girls had given up before the tunnel and another one had gotten a ride also. So I only missed out on about 3-4kms.

Started riding again after the break and was totally terrified once we got to the ‘Death Road’ section. Not only was it pebbles, but it was loose, wet pebbles….oh yippee. But they divided us up into groups – testosterone (gung-ho’s), intermediate, slow and the granny group (which was Matt and me). For most of the way, I just kept watching the guides back wheel and trying to look ahead because I couldn’t do anything about what was under my tyres, I just needed to concentrate on what was coming up. And while it was scary, it was still good because for most of that section I couldn’t see how far the drops were although there was the odd occasion when the clouds lifted but it was great to see all the water falls that sprang up.

We stopped for lunch on the side of the road and had come down below the clouds and the rain and were into the tropics. It was quite warm and steamy. Matt and I joined up with the slow group and I think we both got a little cocky and we whizzing along having a ball, when Matt overtook me and then stacked it. It wasn’t a bad stack but it was enough to make me take it a bit easier. But it was great and I didn’t come in last which was nice.

Then we went to a hotel for lunch and drove back to La Paz. As we drove back through the mountains the nearly full moon was shining on the snow covered peaks (it was beautiful) but it also explains why we were so damn cold.

The last 3 days have been in the jungle and we’ve just come back to almost civilisation today but are now in a jungle town. An awesome experience but need some food now and have had enough typing for one day. Mind you I didn’t even know what day of week or what the date was until I got on-line. It’s excellent.