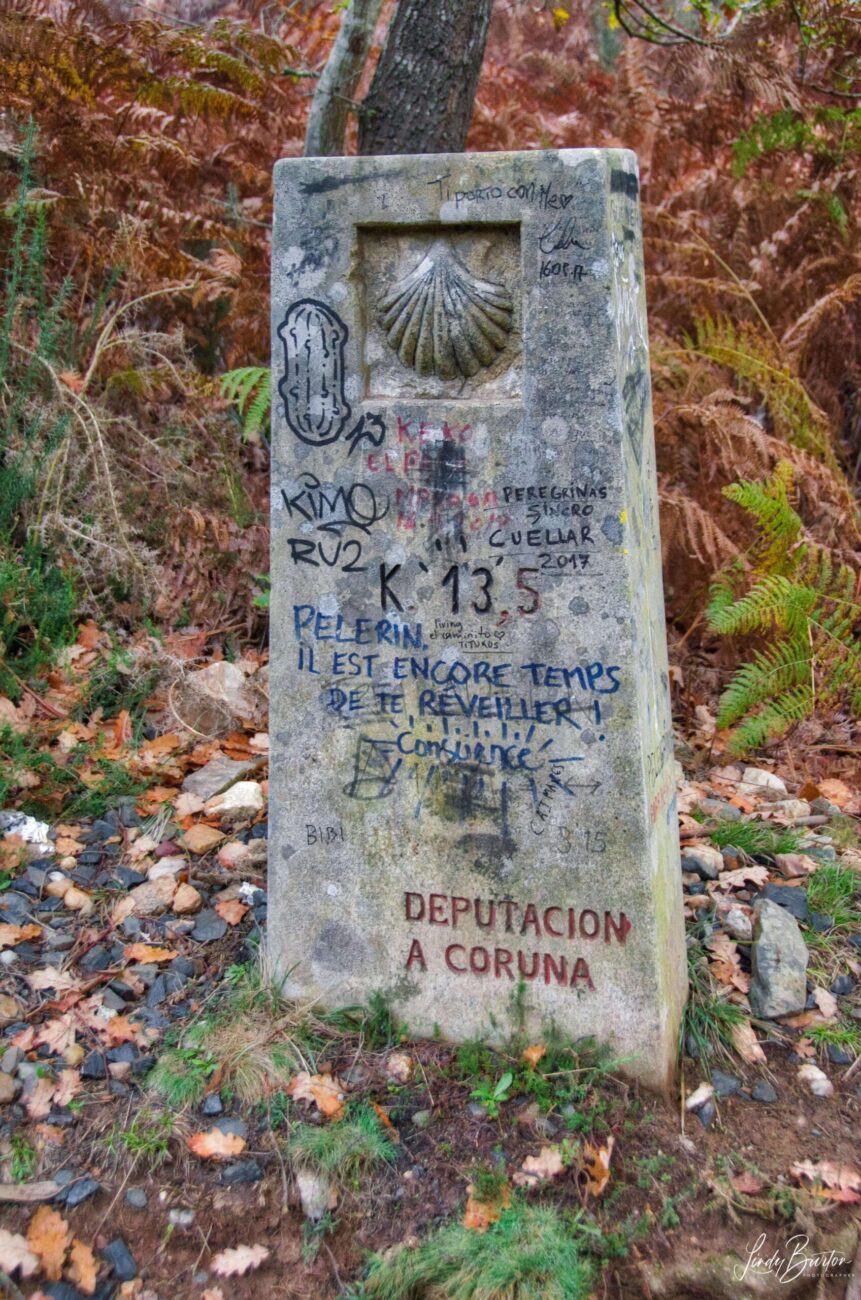 Well, it’s finally my last day of walking. 20kms to Santiago. It’s raining lightly which is a bit disappointing, not the way I wanted my last day to pan out. At least it’s not ridiculously cold.

It stopped raining just as I was leaving Pedrouzo but was still quite foggy and dark turning into the forest. The walking was beautiful yet again, through eucalypt forests, which are a bit boggy under foot.

I chatted with a Spanish couple that I’ve seen a few times lately and also a Dutch guy. We ran into each other when we stopped for a much needed break in Lavacolla. Being Sunday, their isn’t much open so you take stops where you can find them. If it wasn’t for him, I would have missed the cafe entirely.

I trudged up what I thought was the final hill, thinking I was in Monte del Gozo but I was only in Camping San Marcos….bummer. The Japanese group were ahead of me and were making a dash for the Mount of Joy monuments, which meant waiting for ages to get a photo. A well-placed cafe seemed like a good place to stop for lunch and let the Japanese disperse. Only about 6kms to go.

It would have been easy to have walked straight through Monte del Gozo but we seemed to go around it. I got a bit confused at the convention hall (which funnily enough was having a Camino Expo) with a distinct lack of way-markers. I kept on walking and to my right was the “you are no longer in Santiago” sign, so turning left seemed to be the way to go and the signs appeared again.

And just when I worked out that I’d actually reached Santiago was when it started to rain. Just lightly at first but it gradually got heavier. I had no idea how far I had to go and couldn’t be bothered to stop and get out my raincoat but I was getting to point where my jacket was getting a bit waterlogged.

The walk through Santiago seemed never ending. It was apparently only 3kms but it felt like 10kms. There are some amazing modern buildings on some of the hills but it’s too wet to get the camera out.

I finally started to get into the old town but getting to the cathedral wasn’t without difficulty. The signs seemed to suddenly stop at the edge of the old town and I had to ask people how to get to there. It was raining quite heavily by this point and the streets are old paved stones and slippery and you have to come down a fairly steep decline to get to the square. I thought it would be incredibly embarrassing to come all this way and stack it in the final few feet. As you got down the steep path through the archway, there was a bagpiper playing and the music was so incredibly haunting.

All the footage I’ve seen of people arriving in Santiago has the square really busy and full of people so it was very surreal to see the square itself totally deserted. Because of the rain everyone was standing under the shelter of the surrounding buildings so I had the square entirely to myself which was quite odd. So I stood in the centre of square in the rain and looked at a cathedral that was covered in scaffold. It was a bittersweet moment and while I shed a few tears, I wasn’t the emotional wreck that I thought I’d be but at the same time there were so many emotions coursing through me.

As I was heading to the hotel, I ran into the Dutch guy I met earlier in the day. He shook my hand and I hugged him….I couldn’t finish the Camino and not hug someone and he told where to go to get my Compostela. I was so dripping wet (still couldn’t be bothered getting out the raincoat) and went to get my certificates and then I checked in at the Parador (5 star hotel that used to be a palace) and I dripped all over their floor. They were a bit too snooty to for me but I had to stay there even if just for one night.

It was a 5km trek to my room and was hoping they supplied maps and snacks to be able to find it again. I was having a giggle at the porter lugging my backpack all this way and then suddenly stopped when I realised I was going to lug back tomorrow when I check out….bugger! The place is very lovely, had a shower to warm up and then thought a bath might be a nice idea so had one of those too.

I ran into Vince, who was staying there too and he invited me to have dinner with a few people that he’s walked with and it turned out I had walked with a few of them over the last few days. Had a fantastic Caesar Salad and a really enjoyable night. It’s going to weird not walking tomorrow.