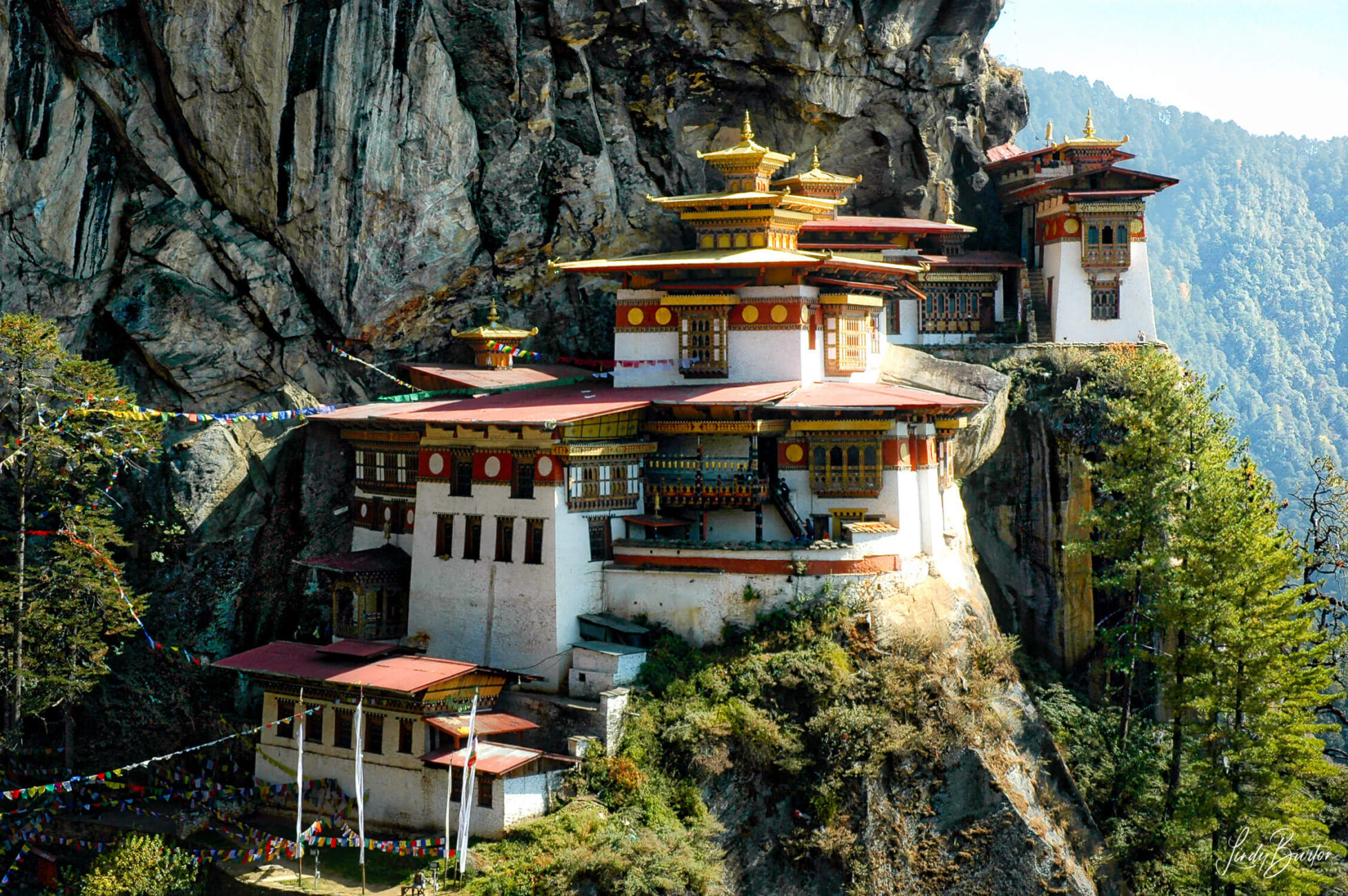 As promised or briefly alluded to really, I’ll fill you in on the last couple of days.

Yesterday was a drive through from Punakha to Paro, stopping for the photos of the Himalayas minus the cloud this time at Dochu-La Pass and them dropping back in to Thimpu to visit the Arts Institute and the Post Office to buy some very artful Bhutanese stamps. Then it was on to Paro with a visit to the Watch Tower Museum and the Paro Dzong. Now for someone who doesn’t have alot of time for museums, this one was really interesting.

Woke this morning to find the valley thick with cloud that seemed to be closing in rather than lifting. Which made me unsure as to whether the hike to the Tiger’s Nest would happen. There was a secret part of me that was hoping it would be cancelled but I was not to get out of it that lightly. It’s a hard hike, a 915 metre uphill slog to the Tiger’s Nest perched 3050 metres up on the edge of the cliff face. At one point I said to Tashi that I was glad it was caked in cloud because I couldn’t see how far I had to go, to which she delightedly pointed out that we could see it from here and before it was too late I’d already looked and wished like hell I hadn’t. The half way point is marked by the first view point where a much welcome cuppa, rest and toilet are found. Then it’s back to the slogging to the second view point. From here it’s down 400 steps, across a bridge and then up another 400 steps to the Tiger’s Nest. And of course once you get there, there’s more bloody stairs to climb. The monastery was built in 1629 and most of was burnt down in 1998 and it took 7 years to rebuild it. I went in to 4 of the 8 temples (some are closed to tourists). Then of course you have to walk down the 400 steps, back across the bridge and up 400 steps before it’s all downhill stopping at the restaurant at the first viewpoint for lunch. The round trip took just under 6 hours including time at the monastery, morning tea and lunch so I was pretty chuffed. Apparently quite a few people get to the 2nd viewpoint and don’t go any further….I can sort of understand it because it is pretty imposing. And then there’s the lazy buggers (or the smart one depending on your view) that go up on donkeys as far as the 2nd viewpoint but they still have to negotiate the stairs and they have to walk down. But I feel a much greater sense of achievement knowing that I walked it….no matter how much pain I’m in tomorrow.

And alas tomorrow morning I fly back to Nepal. After a week in Bhutan, it’s really hard to get enthused about returning to Kathmandu….stinky, smelly, dirty. I’m hoping by spending a couple of days there I’ll see it in a different light…here’s hoping.

Anyway, I’m keeping this one short for a change and will be in touch in the next few days.