Parahawking and all that fun 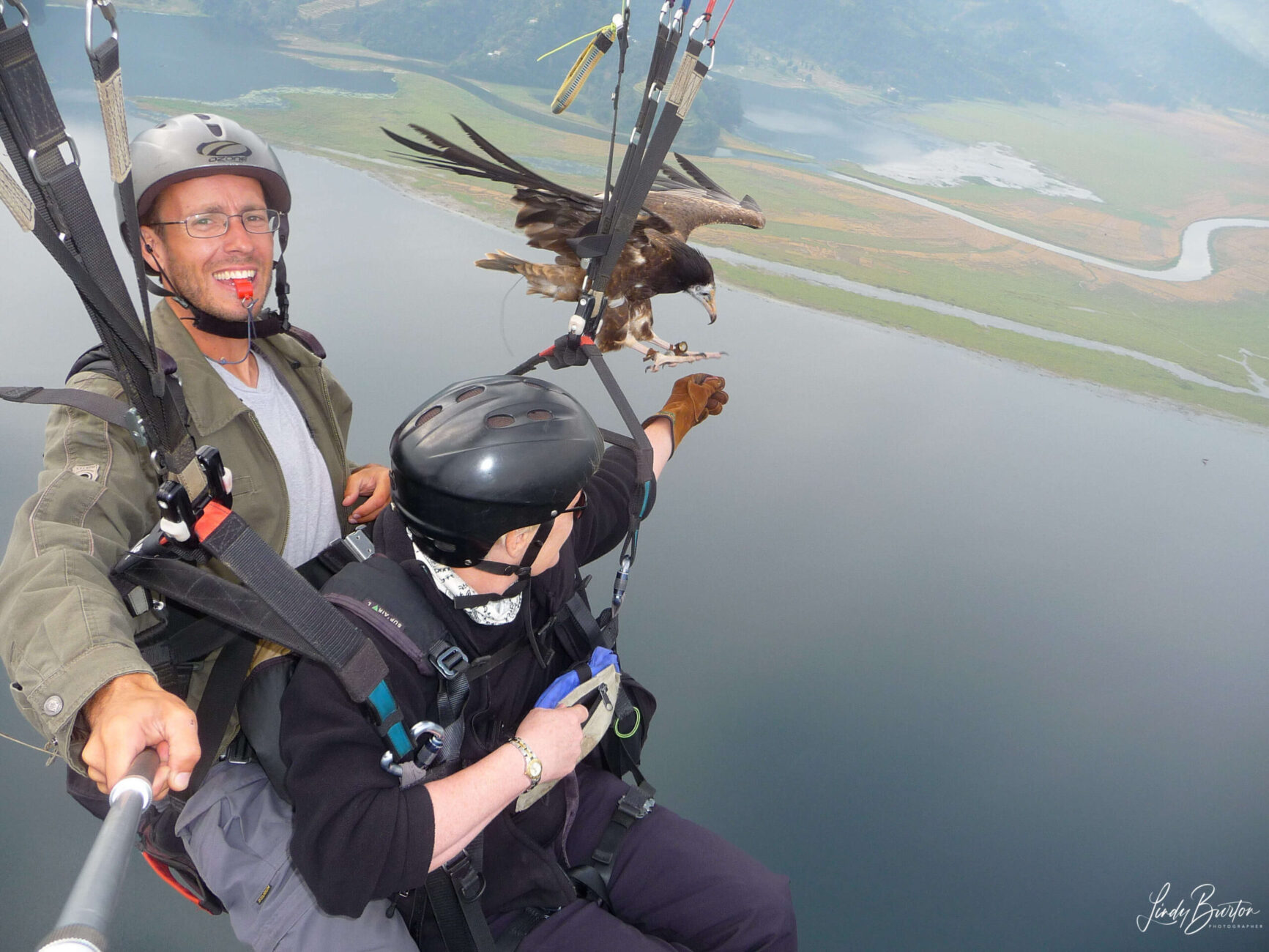 I realised I’ve been very remiss and while I’ve told you A LOT about what I’ve been doing, I haven’t told you much about anything else.

Besides the people being devout Buddhists, they are generally a fairly good looking race and they have complexions most of us would kill for. The only people I noticed that had wrinkles were the really old ones. Must be all that healthy living and I only saw 3 or 4 overweight Bhutanese.

The food was mostly very healthy. Breakfast was buffet style with eggs of some description, fried tomatoes, porridge (ugh) or cereal and a few other options. For lunch they would bring out up to 6 or 7 bowls of different things. Always rice usually red (which is a short rice and has a purplish colouration but doesn’t taste any different), chicken (with bones) or fish (with bones, I got to the point where I gave up on the fish because there were so many bones) and bowls of various other veggies – cauliflower (with cheese sauce…yum….I did say mostly healthy), beans, mixed veggies etc. Dinner was usually a buffet again with pretty much the same options but done differently. So I was eating 3 very square (mostly healthy) meals a day and the only snacks we had tended to be a biscuit or two with a cuppa when we got back to the hotel.

I got driven round in a Hyundai Tuscon 4WD and there are quite lot of 4WD, mostly Hyundai’s, Toyota’s and a few Honda’s. The market leader is definitely Maruti Suzuki which is an Indian rip-off brand, as is apparently the Honda branding. But they are very car proud and will wash them and wipe them over at every opportunity. On the road to and from Bumthang (well it’s that same road so it has to be to and from really) there were dozens of waterfalls and a lot of stupas with prayer wheels in them that are water powered. There were also many places where piping had been put in so the water run off was easier to use. At many of these places, people could be found washing their cars, trucks and sometimes even kids. I can’t say that I noticed even 1 car with a dented panel.

In Nepal it’s very common to see people wearing face masks (like the type doctors wear only black although I have seen the occasional hot pink one) because of the exhaust fumes and dust. I’ve taken to wearing my scarf….team that with sunglasses and a hat and I look like your regular bank robber. But seeming them wear them in Thimpu and to a lesser extent in Paro was really surprising. However once we got back to Thimpu after being in the crystal clear air of the country (the only smoke was from cooking and heating) I could almost understand it.

Getting back to cars though…the opposite is true of course for Nepal where I’m unsure that there is not a single car without a dented panel. I am really curious to know what the road toll is like in Nepal because by rights, it should be horrendous but somehow I think it’s probably not as high as I imagine.

Coming back to Nepal hasn’t been too bad really. When I got back to the hotel I sat down with my map and Nepal book and orientated myself and then went in search of somewhere for dinner and found that I didn’t really mind it too much. Although now that I’ve got things to do in the evenings I probably won’t write as much or as often. In Bhutan the hotels tended to be out of town a bit so once we got back there was nothing to do so emailing was a great way to fill time. Now I go out for dinner and the internet at the hotel is way too expensive so I either read or watch tv. And now that I have options for dinner I have no idea what to have. Speaking of watching tv I was flipping through the 48 channels the night before last and watched Nim’s Island on Star Movies (can’t believe I had to come to Nepal to watch Nim’s) (for those that don’t know, Nim’s Island was filmed in Queensland and PFTC (the place I work for) helped fund it). Oh yeah and Bondi Rescue screens on National Geographic channel (happened to see that in Bhutan).

In Bhutan, drinks are served at room temperature which is okay for lemonade but not okay for coke or beer. and speaking of beer I nearly fell over when I noticed that they sell Fosters and I even saw VB in Nepal. Thankfully the Nepalese serve their drinks cold. Tea is always served with hot milk however it was unfortunate that the water wasn’t always.

I forgot to mention that after doing the Tiger’s Nest, we went and saw a ruined fortress (burnt down) that they are looking into restoring and from there we had an awesome view of Mt Jhomolhari (pronounced Chomolhari) the second highest mountain in Bhutan which lies on the border of Tibet. And also another temple that was built in the 5th century.

On the flight back, Everest and it’s neighbours were caked in cloud so I felt vindicated that they didn’t give me a window seat but the Aussie couple that were way behind me in queue got one…..bitch bitch bitch….there goes any good buddhistness that I’d built up over the week.

Yesterday I had a really early morning because I had to be at the airport at 7am to catch an 8.10am flight to Pokhara which didn’t leave until 9am…..we are running on Nepal time here. It’s only a 25 min flight with stunning views of the Himalayas. They just seem to go on forever. I do wonder how spectacular they would be if they weren’t snow-capped. Would it simple be a case of ‘ho humm more mountains!!!’ I unfortunately had no way of letting the parahawking people know that I was going to be late. Got to the office and thankfully they were still there because it had been a really foggy morning and they were waiting for the weather to clear. Had I not arrived when I did, I would have missed them by a couple of minutes and I would have been rather pissed at that. So we jump in cars and head up a mountain which was okay while it was bitumenised (is that a word) but then the road ran out and we just kept on going. I was only glad that it was a one way trip and then a short walk to the jump site.

Parahawking is the same as paragliding but with birds of prey. Paragliding is a cross between hang gliding and skydiving but nothing like either. It’s like hang gliding that you launch yourself off a perfectly good mountain (that was the bit that scared me) but unlike hang gliding you are sitting up rather than lying down and you have a canopy instead of a kite (and the canopy is quite different from that of a parachute). The birds come into by finding the thermals and we have bits of meat that we put in our glove and they whistle for the bird to come in and it lands on our hand and has a feed……way cool. Thus and therefore parahawking although the birds were actually a black kite and 2 Egyptian Vultures. If you want more info check out www.parahawking.com My pilot was an English guy, Brad and my bird was an Egyptian Vulture named Bob. The take off is is really quite easy, once the wind is up enough you walk a few steps and the canopy inflates, then run a bit and you’re off. Just sit back and enjoy the view and it was an amazing few. There is a beautiful lake at Pokhara so we were flying over it for quite some time (just hoped that we didn’t come down in it) and feeding Bob. The first time he landed on my hand I got a bit of a start because I was busy watching the view and I had my hand out for him to land on but I didn’t realise he was so close, so when a 2kg bird lands on your hand its a bit of a surprise. Unfortunately, due to the weather we had a short flight but it was awesome all the same and we landed next to the lake and hung around there for awhile checking out the birds and then back to the town and a meander before going back to the airport to fly back to Kathmandu.

I was thinking about doing the Everest flight (yeah I know even though I’ve seen it but it would still me nice to see it a bit closer) but the windows of the plane were filthy and I’ve really spent way too much time at Tribhuven airport because none of the flights leave on time. Usually up to an hour late and I will have to fly to Pokhara again in a couple of days so am leaning towards giving the Everest flight a serious miss.

Today is a cruisy day for me, I check out of my hotel soon and then move to the ‘tour’ hotel which officially starts today although it is a free day. We will be starting the sight seeing tomorrow, rather than just meandering the tourist shop area like I’ve been doing. Will try and write something briefly before heading off for the trek…..very nervous about it.