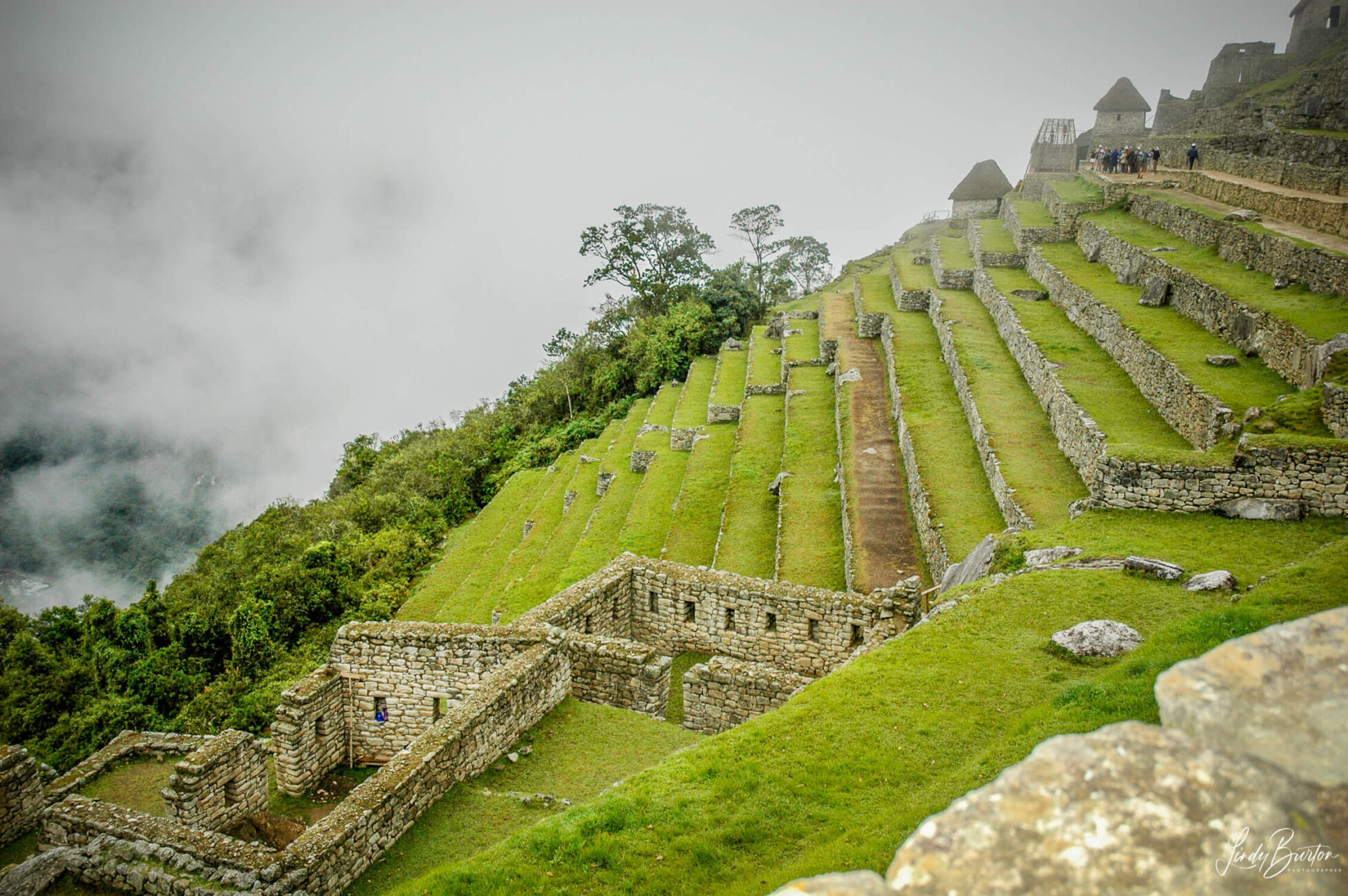 Sorry for the delay, there is so much to catch up on but I’ll have to do it in instalments. I spent another day in Cusco on my own but didn’t do too much. It was nice to have the time to myself so slept in and just meandered around. The next day I was picked up at the hotel at 6.15am to get the train to Aguas Calientes which took 4 hours. There were 3 others on the trip with me, Lauren (USA), Michael (Swede) and Martin (UK) and we all got along really well. We had lunch at the hotel (one of the best buffet lunches I’ve had in Peru) and then had the afternoon to do whatever we wanted. The other 3 decided on a hike but I decided to mooch around the village and check out the markets, then we all met again for dinner and went for a drink. An afternoon is all that’s needed in Aguas Calientes because it’s literally restaurant after restaurant with tourist shops in between.

The next morning we had to be ready again by 6.15am to catch the bus up to Machu Picchu. It was raining when I woke up. The idea of seeing Machu Picchu in the rain had never even occurred to me so to realise it was only raining in the village was a huge relief. The bus trip up takes about 35mins and we were in cloud the entire time. The tour lasted 2 hours and then we could spend as much time as we wanted exploring as long as we made the train back at 5pm. Once we got through the gates most of the other groups headed for the lookout which was pretty pointless because they wouldn’t see anything. Our guide took us down through the ruins. It’s such an amazing place and I’m really glad that it was in cloud because we got to see bits and pieces of it as the cloud lifted and then closed in again, so it was like getting surprises all the time. By the time the tour finished, all the cloud had gone and we were on the far side of the ruins and needed a pit stop. The loos are outside the gate so we had to walk all the way back and poor Martin was busting. On the way out I ran into my group from the trek, they were in the early stages of their tour. Sat around outside the gates for a while and had breakfast (you can’t eat in the grounds) and then went back in to see the views from the ‘guardhouse’. Met up with some of my group again and ended up back outside when all the herds of day trippers arrived. I really wanted to go back in and find a quiet place to sit and reflect but there was a constant queue of people lined up to get in and I didn’t want my memories spoilt by seeing thousands of people seething over the ruins. But it’s such an amazing place, truly awe-inspiring.

Then the 4 of us decided to walk down to the town which involved 2478 stairs (okay slight exaggeration) but it felt like it. My ankle has been okay but my knee is killing me. And no, I don’t regret not doing the trek. Then we had several hours to kill before the train left.

The trekkers get up at 4am on the last day of the trek and they have the ’24 Hour Challenge’, they have to stay up for 24 hours after hiking for 4 days. I got roped in to doing as well although I only got up at 5am. So when I finally got back to Cusco at 9.30am, it was a case of throwing myself in the shower and meeting the others at Paddy’s (the Irish bar) and then dancing the night away at various night clubs. It was an excellent night and I made it home at 4.30am totally sober…..woohoo. So I lasted 23.5 hours rounded up gives me the 24 which is better than a lot of them managed.

Somehow managed to wake up at 9.30am the next morning and went for brunch with Matt and then headed into the artist’s quarter of Cusco. He’s great to go shopping with because he’ll go into every shop and market place. Bought a couple of bits and pieces and stopped at a cafe for cake on the way back. Discovered Peru’s prettiest toilet….that was prettiest, not necessarily cleanest. We’ve seen some incredibly dodgy loos. It was a quiet night for most of us but the usual suspects headed out on the town again, with some of them only just making it back in time to throw their gear on the truck. It was a case of avoid the hangover, stay drunk, so they all kept drinking. It made for an interesting trip with a lot of laughs.

Arrived in Puno which is on the edge of Lake Titicaca, with a few people feeling a tad seedy as they were just starting to sober up and a few people that were genuinely sick.

We just got back from a trip out on the Lake and our homestay on one of the island. Definitely a unique experience and I’ll save that for the next episode.